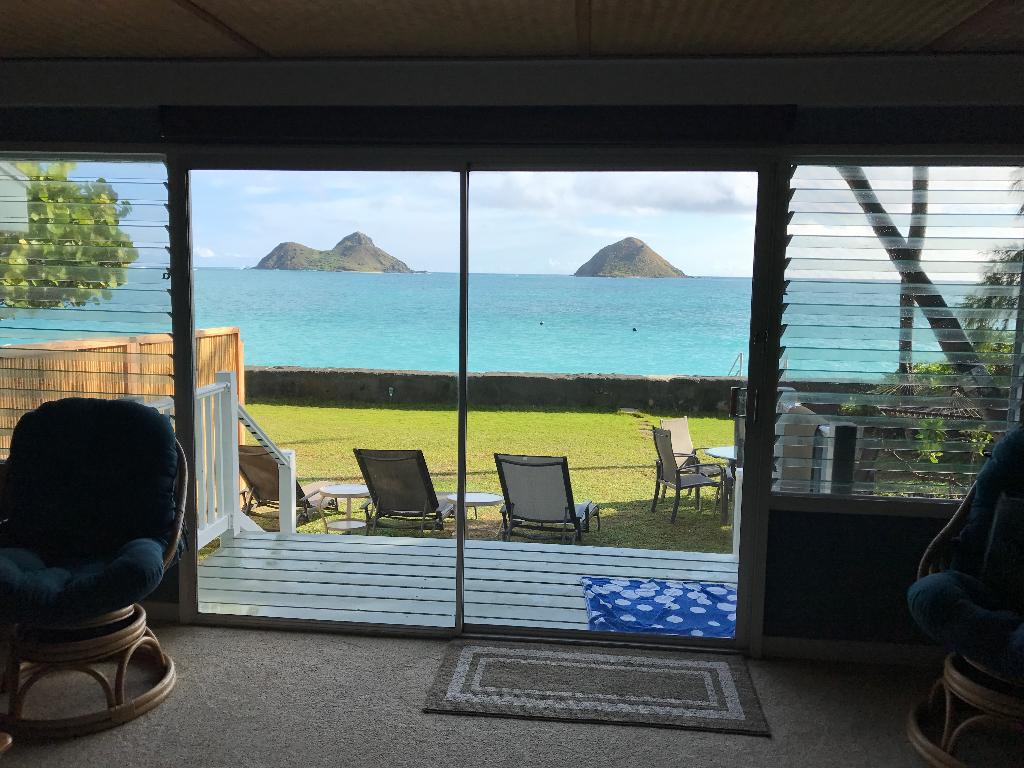 Mokulua Lani is a simple and comfortable two-bedroom one-bath ocean front duplex with the most superb location in Lanikai, named for the fabulous views of the Mokulua Islands (the "Mokes").

Location Location Location! Mokulua Lani's ocean front location exactly in front of the twin Mokulua Islands provides endless hours of outstanding views from the ocean front yard, the living room, dining room, side deck, and even from the ocean front Queen bedroom. Our railed stairway to the ocean gives you easy access for swimming, snorkeling, and kayaking. Your days are filled with the sounds of waves, trade winds blowing through the coconut trees and picturesque sailboats, kayakers and outrigger canoes going by. Lanikai provides a fun and healthy lifestyle in a friendly beach community. It's perfect for adults and couples wanting a relaxed Hawaiian style home environment away from the busy and crowded resort areas.

Mokulua Lani can accommodate four guests: 2 in the lanai bedroom (King bed), and 2 in the ocean front bedroom (Queen Bed). There is also a queen sized futon in the living room. In addition to the shower in the bathroom, there is an outdoor hot water shower. The King bedroom has a window air conditioning unit.
The two sides of the duplex are private and well-separated. The owners maintain a low profile, but are always available if needed. Shared spaces with owners are the driveway and ocean steps. The yard is divided by a privacy panel and owners have a small outdoor area on their side of panel.

-- Off street parking for one car

-- Full kitchen (but no dishwasher)

-- Railed steps to the ocean

-- A variety of beach and water toys

-- Iron and ironing board

This Property is a legally established rental accommodation that is rented for periods of 30 consecutive days or more at any one time.

SOME ADDITIONAL PAST REVIEWS

Amazing!
The most well stocked, well thought out home. Could not have asked for anything more unless we could have controlled the weather! Truly an amazing property, no disappointment. It took us a day or two to adjust to the long driveway in our large car, but we soon mastered the navigation. Great location, amazing swimming and watch the sunrise each and every morning. We will never forget our vacation and would return gladly.
Nancy M, Dec 2015

Special place!!!!
Love this place, very homey and comfortable, many different little hangout areas. I love that it is kept as a casual beach house, but has all the comforts.
Eileen T, Nov 2016

Lanikai Love
This is by far the best house in Lanikai if you want to wake up to a daily gorgeous sunrise directly in front of the Mokes, walk to Lanikai (and Kailua) beaches, have a great 3 mile walk around the neighborhood loop and just generally relax. The house is stocked with everything you need in the kitchen, there are plenty of places to relax both outside and inside, the neighbors are sweet and the owners are very responsive and nice. The back yard is perfect for relaxing or for dining outside. The outside shower is great for rinsing off after spending hours in the ocean; which we did every single day. The neighborhood is generally quiet and we spent hours at night in the back yard or on walks, staring at the clouds and stars. Whole Foods and other stores are just a 10 minute drive away, and Buzz's Steakhouse is the best place to walk or drive to for lunch. Sit at the bar and order the fish sandwich and a Mai Tai...the best! We will definitely stay there again and look forward to it.
Rebecca C, Oct, 2013

Best Vacation House Ever!!
I have been back on the mainland for a week now and my heart aches when I look at the pictures of our beautiful ocean front house. From the moment you arrive you know you will not want to leave this place. Rent your kayak on the way to the house, pick up some food and beverage and you are set for your stay. Gorgeous white sand beaches, crystal clear water, sea turtles swimming right by your house, snorkeling for hours, kayaking to the islands, Pill box hike right in your neighborhood, Ocean breezes at night. The house had EVERYTHING we needed bath towels, beach towels, washer/dryer, ironing board, wifi, dishes, pots,pans, outdoor shower, grill, boogie boards,hammock, beach chairs, ice maker in fridge...the list goes on and on. The lanai was our living space. We ate, relaxed and hung out there. I would highly recommend this house if you are visiting Oahu.
The Peppers, May 2013

Mahalo, Mahalo, Mahalo!
We came to this place for the wedding of our daughter, sister, and friend. It was perfect that we were all able to stay together in this beautiful house on the water. This excellent setting with the view of the 2 little islands, with the outriggers, kayakers, boaters and swimmers brought back the memories of the beautiful place that brought us all together, Palau, and that made us all family. ... We so enjoyed our early morning swims with the gorgeous sunrises. The colors from the sunsets were amazing. The stargazing incredible. All the neighbors were so kind and friendly. Most of all we enjoyed our daughter's, sisters's and friend's wedding that was a dream come true for us all. We made so may more beautiful memories here to share with one another and friends when we meet again.
Barbara & Chuck

Thank you so very much for the wonderful stay in your beautiful home. We had such a relaxing vacation here. The view is incredible and we loved the privacy! Everything was just perfect--couldn't ask for a more accommodating home away from home.
Mahalo -- Nipp, Tracie, Perry, & Chloe, Peachtree City, GA

Thank you, we had a great time here, a beautiful place and perfect, just what the doctor ordered--to be able to relax and unwind from life on the mainland. Beautiful!
Curtis & Lisa, California

We had a lovely stay in this beautiful place this week. Our original purpose for the trip was our daughters' graduation from University of Hawaii. But the trip became so much more. A rare opportunity to enjoy our two grown children at the same time. My father died last month so this also provided my mother and all of us a needed respite. The tranquility & beauty were very healing and we are sorry to go home so soon.
Mahalo mucho for all the hospitality - The Matlocks, California

$475 per night. 50% down to hold a reservation. Balance due 45 days before check-in. $500.00 security deposit. $250.00 cleaning fee. 4% processing fee. Listed rates do not include tax. Holiday and peak season rates and required length of stay may be different than quoted above. Credit cards, cash, checks and wire transfers accepted. Minimum night stay varies amongst the various rental units. Many rentals have 30-night minimums. Tax number: TA-139-440-7424-01.

Availability shown in this calendar is not guaranteed and is subject to change at any time. Bookings are not guaranteed until a contract is confirmed.

Our Local Agents are Available
All Day, Every Daysurf conditions permitting!

Call us today to experience the difference.

Our agents live, work and play on the islands of Hawaii. This ensures you the benefit of local expertise while planning your prefect vacation getaway.

Open All Day, Every Day

What our customers are saying:

"Your customer service is only matched by your incredible selection of rentals and easy online payment. My family has used you guys for the past 5 years and we will continue to do so."