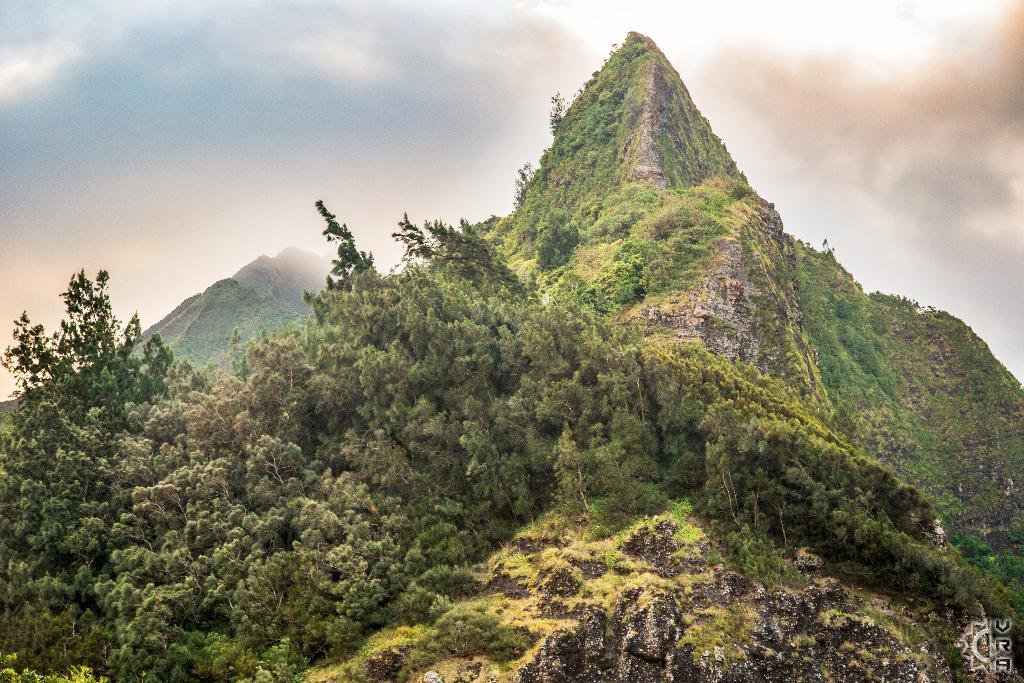 The Nu'uanu Pali Lookout offers beautiful panoramic views of Oahu's windward side from the Pali cliffs along the Ko'olau Mountain Range. Just a short drive from Kailua and Kaneohe, the lookout is located off of the Pali Highway (Highway 61).

The lookout connects with the Old Pali Road, an abandoned, overgrown road cutting along the edge of the cliffs. The lookout is at 1200 feet elevation, and the wind here is incredibly strong so much so that you can usually lean back against it as if it were a wall.

HIGHLIGHTS:
The lookout is a popular stop-off point for tourists and tour buses. While you'll see many people walking out to the lookout point for a few pictures and then heading back to their vehicles, there is much more that can be done here. Off to the left of the parking lot is the start to a trail that leads up the ridge to a "puka" a hole in the cliff. This hike is gorgeous and thrilling, with sheer drop-offs to either side of the ridge. When possible, take the trail line down through the "forested" areas to avoid the ultra-narrow ridge line. These short paths always re-connect with the ridge line and make the hike a bit safer. The area around the "puka" is very windy, so use caution. The trail does continue up beyond the puka, but it gets quite dangerous at this point and is not recommended.

To the right of the lookout is the entrance to the Old Pali Road, a mysterious and enchanting cliff-side road that is now closed to vehicle traffic. There are some gates with signs warning of falling rocks posted at the entrance to the road, but the gates are open and the old road is popular with hikers and tourists so don't be concerned to pass through.

The Old Pali Road followed a similar path of the current Pali Highway, connecting Honolulu to the windward side of the island. It followed the dirt path that the ancient Hawaiians used to pass through the mountains and is said to be a very spiritual place. Many local ghost stories trace back to this road. It's been closed for over 50 years, and in that time nature has made great strides in taking it back. In many places, the jungle creeps over the road covering nearly half of it with plants, flowers, and lush greenery. The wind is calmer here, and it is peaceful and quiet.

Cost:
Although there is a small fee to park, there is no cost to visit the lookout itself.

Directions:
From Kailua, take the Pali Highway (Highway 61) toward Honolulu. Shortly after passing through the tunnel, you'll see an exit to the right onto Nuuanu Pali Dr, with signs pointing toward the lookout. Follow the signs; the lookout will be on your left.

Oahu Things To Do Locations