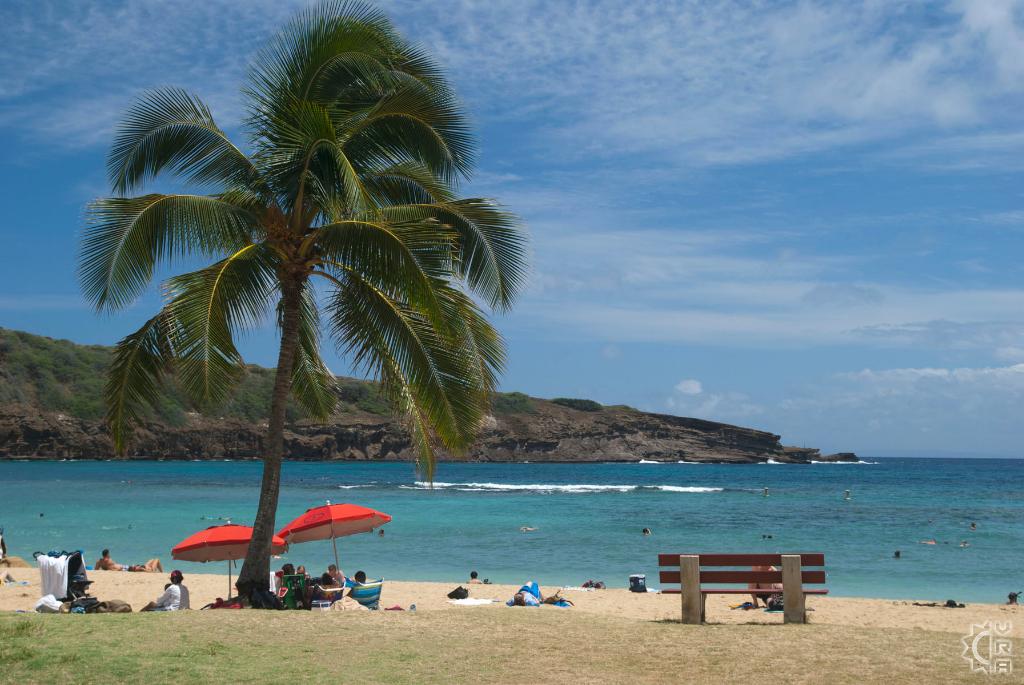 Hanauma Bay Nature Preserve
This is a must-see wonder of nature on Oahu's south shore. In the years under protected status, the fish population has returned to very high numbers, and numerous marine life is thriving, creating unparalleled snorkeling opportunities. As a State Nature Preserve, the focus here is educating island visitors and residents alike on the ocean's ecosystems. The bay itself is a spectacular geological feature, as it is formed by a collapsed eroded volcanic cinder cone. The park is only about 15-minute drive from downtown Honolulu and easy to find, but parking is somewhat limited to lessen the strain on park's resources.

AT A GLANCE:
HIGHLIGHTS: Healthy reefs and variety of underwater sea life, it is Oahu's best and safest snorkeling. Close to Honolulu, but feels like a world away. Beautifully scenic.
ACTIVITIES: Snorkeling, swimming, marine education, scuba diving, beach lounging.
LIFEGUARD: YES, 6am to 6pm. 3 lifeguard towers on the beach, and one on the cliffs above.
WARNINGS!: Closed Tuesdays! Summer hours: 6 am to 7 pm, winter: 6 am to 6 pm. Please regard posted advisories on the orange-flagged signs. Do not swim too close to the cliffs, especially at the farthest half of the bay, as currents and surf smash into the coves with brutal force; a number of visitors have disregarded those warnings resulting in tragedies. It is best to ask lifeguards for advice before setting off to snorkel. The side ledges are off-limits as well.

AMENITIES: Parking, picnic benches, restrooms, showers, tram running from parking lot down to the beach and back, gift shop, and snack bar top side near the parking. Snorkel gear rentals!

Hanauma Bay received protective Preserve status in 1967. Prior to that it was a prime fishing ground dating back to the times of Hawaiian royalty known as "Ali'i". Modern day protections and protocols have helped this marine sanctuary to recover its fish stocks. With an on-going management plan Hanauma Bay hosts nearly a million visitors a year for what is surely their most amazing snorkeling or diving experience on Oahu.

Adventure Tip:
The parking lot here can fill up early, and the vehicle access is restricted based on how many empty spaces remain open. If you come later then 9 am, chances are you may see orange cones and signs saying the bay is closed due to full parking. If closed, visitors must drive down the road and may turn around at Sandy Beach Park (1.9 miles) to drive by later to see if parking has reopened. Coming out early is the best solution for finding Hanauma Bay less crowded and easily accessible. If starting late, it is good to have a back-up plan in case you cannot get in to Hanauma Bay.

From the Visitor Center the path leads to the beach down a steep 200 yard-walk. A $2 tram ride ticket provides access to an all-day shuttle to and from the beach, and is totally worth it! The amenities are very convenient at this beach. There are three restrooms, showers, information stall, and a centrally located snorkeling rental booth with fins and floatation vests, situated right on the beach behind the central lifeguard tower at the bottom of the footpath.

Hanauma Bay Nature Preserve also has a very nice, lush, green picnic area that is not immediately visible from the parking lot. Sitting atop the center of the bay, it provides a welcome shade, with picnic tables situated under tall old trees, and a bathroom. The municipal bus stop is in its immediate vicinity, a clever alternative to being affected by the parking limitations.

Parking and Fees:
Parking is $1 and an admissions fee of $7.50 per person over the age of 12 is charged before entering the Visitor Center. Children 12 and younger visit free of charge. All visitors must watch a 10-minute-long instructional video before entering for the day. The video is designed to help you better understand how to explore Hanauma Bay safely and respectfully. The video is very informative, especially if you are new to snorkeling.


Snorkeling:
The waters right off the beach are shallow, with flat reefs and rocks serving as a habitat for a myriad of fish. Be careful at low tide, as some coral heads might be only a foot or so beneath the ocean surface. The portion of the bay furthest to the left has sandy access point and schools of fish close to shore. Beware of the outer pair of buoys that mark a current exiting the area that can sweep snorkelers into the deeper portion of the bay. The first 75 yards of good snorkeling in the shallows closest to the shore are divided from the outer much deeper portion of the bay by a shallow reef shelf. Standing on the beach looking outward, look for the breaking waves. They are the boundary between the shallow and deeper waters.

For advanced swimmers and experienced divers, there is a safe channel out of the shallows about two-thirds of the way down the beach to the right. Look for two floating buoys marking the channel where current sweeps out during higher surf. The depths grow to 15 to 30 feet out there, with mountainous coral heads and eroded undersea volcanic rocks, and larger species like sea turtles are often seen.

*Never stand on coral reef as they are living organisms that can be harmed by such contact.

Directions:
Honolulu: Take H-1 eastward out of Honolulu, continue as it turns into Kalanianaole Highway/ HI route 72-East. Past several Honolulu suburbs the road will come close to the ocean and then slightly inland through an area called Koko Head. As the road begins to climb out of Koko Head and there are no longer buildings along the roadway, keep a lookout for the Hanauma Bay Road, a parking entrance a few hundred yards ahead on the right.